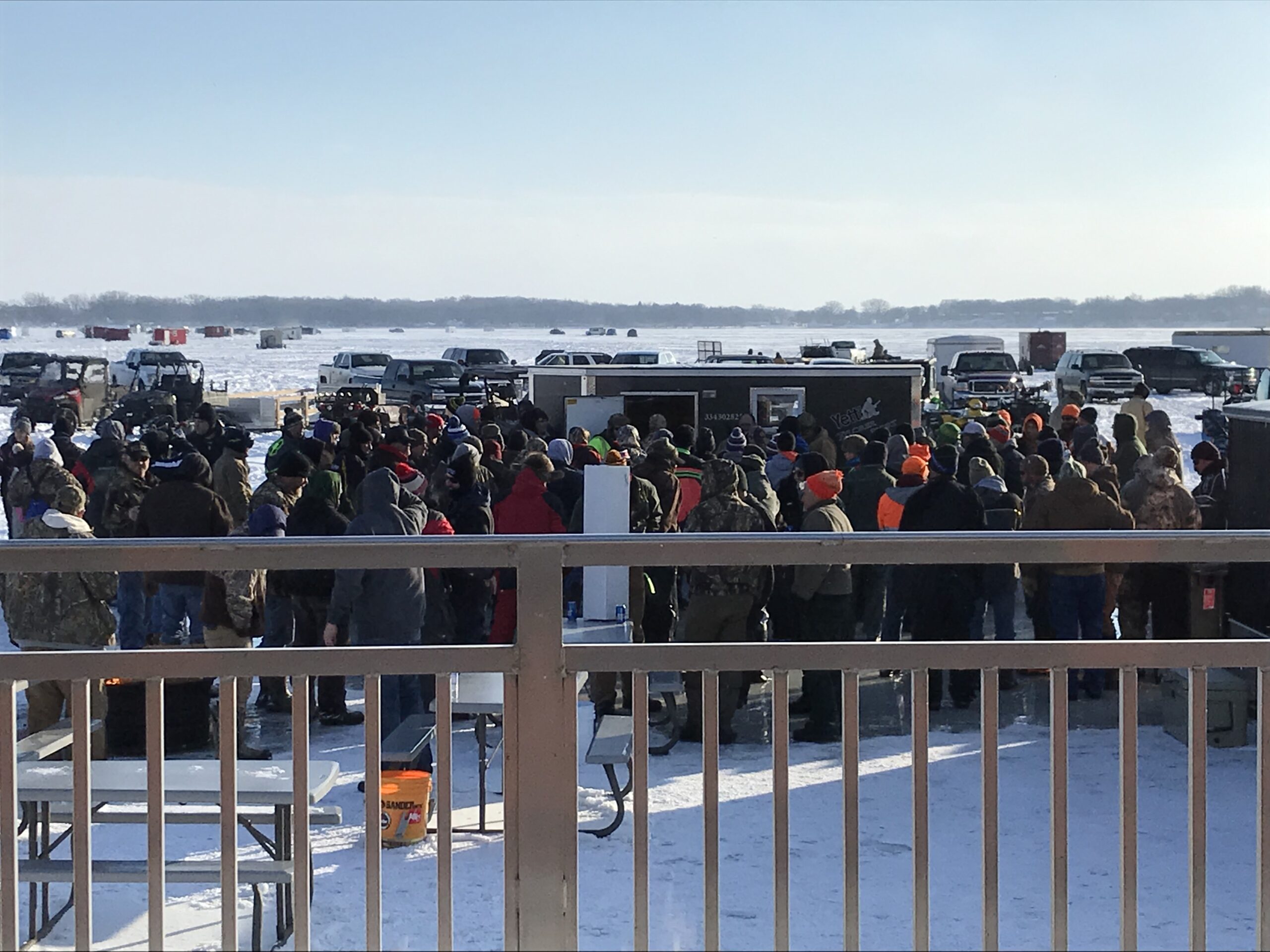 On a sunny but frigid day in January, two hundred nineteen headed onto the frozen lakes in pickups, four-wheelers and sedans. The parade of jubilant anglers, from four neighboring states, was the largest group ever entered in the Fairmont Lakes Foundation Annual Ice Fishing Tournament. I had heard about the event, but no one had ever mentioned the trek from Gomsrud Park across Lair Road that brought the usual traffic to a halt. A sense of anticipation hung in the air.

Vehicles spread over the surface of Hall Lake to the north. Some stopped near the edge, where fishermen unloaded supplies, poles and chairs and made their way across the snow-covered ice. Others parked near and entered ice houses. The colorful landscape resembled a scene in the movie, Grumpy Old Men.

Many come together to make this winter festivity successful. The week preceding, city crews and volunteers had cleared nearly a foot of snow from the parking area and main “roads.” Justin Sommers, owner of local bait shop, Sommer Outdoors has served as information central. He authored social media posts about ice conditions, accepted registrations leading up to and immediately before the 11 am event kick-off. More than 37 sponsors were recognized.

Participants and onlookers could warm themselves at Channel Inn Restaurant that is perched on the north-east shore or brave the cold and exit through the lakeside doors to the recreational area where the food trucks, picnic tables, campfire and weigh-station were located. The restaurant boasts a long history. A Channel Inn burger tops the to-do lists of visitors and is a favorite for local diners. The deck hangs over the water where, offering a beautiful setting to enjoy a meal, watch fowl, fish and greet boater during warmer weather.

The event ended with a 3 pm weigh in and distribution of more than $3500 in prizes and cash awards.

Perhaps the long, cold Southern Minnesota winters help propel attendance. Cabin fever settles in. Events and activities are scarce or disrupted by sub-zero temperatures and massive snowfall, but these ice fishing enthusiasts tend to brave the elements and bring with them an air of celebration!

Fairmont Lakes Foundation hosts another fishing tournament held usually held the 4th Saturday in May, Many of the community docks, kayak launch and kayak rental kiosk were contributed through the organization, but their mission is to promote stewardship and protect the chain of five lakes that divide Fairmont’s east from its west. Members also came together to assist in getting funding to filter nitrates from nearby Dutch Creek. Property owners were offered resources and education about best practices to prevent shore erosion. The Foundation works closely with city administration, the county conservation club and soil and water non-profits in common concerns. You will find great information about the chain of lakes in Fairmont like what fish you will find and depth at www.fairmontlakesfoundation.com. If you would like to support the foundation and their mission to protect George, Sisseton, Hall, Budd and Amber Lakes, consider donating online.

About Fairmont Chain of Lakes

The 1,178 acres comprising the Fairmont Chain of Lakes, is a part of a 400 square mile, 20,000-acre watershed. Just south of town, the water flows north through a reservoir from North Silver Lake. These waters are a part of the Minnesota River Watershed, taking our water north all the way up to St. Paul where it enters the Mississippi River and ultimately flows to the Gulf of Mexico.

The lakes are home to more than fish.

Shorebirds commonly seen: Ducks, Geese, Pelicans, Seagulls, Cormorants, Herons and Coots. Most shorebirds arrive in April. Occasionally we will see Eagles and our state bird, the Common Loon. Puddle or Dabbler type of ducks commonly seen: (those that are able to lift off from the water or land immediately and feed with their bottoms tipped up) Mallard, Shoveler, Teal, Wood Duck and the Black Duck. Diver type of ducks commonly seen: (those that have to first patter along the water surface for several yards before they can lift off the water to become airborne) Bufflehead, Canvasback, Redhead and the Ringneck.

Fairmont Minnesota beginnings can be traced back to the days before Minnesota became a state. In 1826, a log stockade dubbed, Chain of Lakes Post was established which served as an army post and trade center on the site now covered by the Martin County Courthouse. Old Fort Fairmount, as it was later known, was garrisoned by volunteers and troops of the 25th Wisconsin. Fairmont was platted in October 1857, by the Des Moines and Watonwan Land Company, by whom the name was applied. The City was named for the rolling hills which surrounded the adjacent lakes. The town was incorporated in 1902.

Points of Interest and Things to Do All Year ’round

Water play can be enjoyed whether you bring your own watercraft or rent locally. Rent a kayak from Fairmont Lakes Foundation’s rental kiosk. Note that you will need to check in at Sommer Outdoors to do that. Watercraft rentals are available from Pioneer Pontoon Rentals and Marina Lodge (canoes).

Twenty-nine parks lie inside the city limits. If you are looking to host a group, some offer amenities like climate-controlled shelter houses with kitchens, grills, disc golf, tennis and basketball courts, walking and biking trails. Bring your pet to the dog park. Bring the kids and spend some time at Fairmont Aquatic Park.

Check out the community calendar at www.fairmontareacalendar.com for entertainment and live music.

Visit www.visitfairmontmn.com where you’ll find information about where to stay, things to do and places to eat. 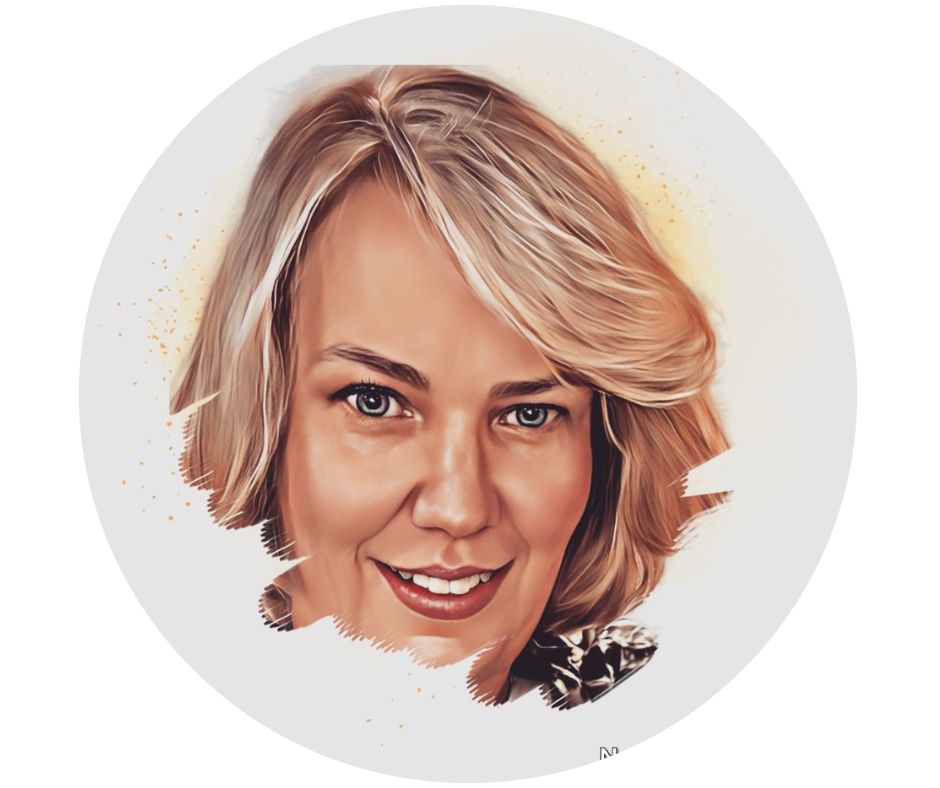