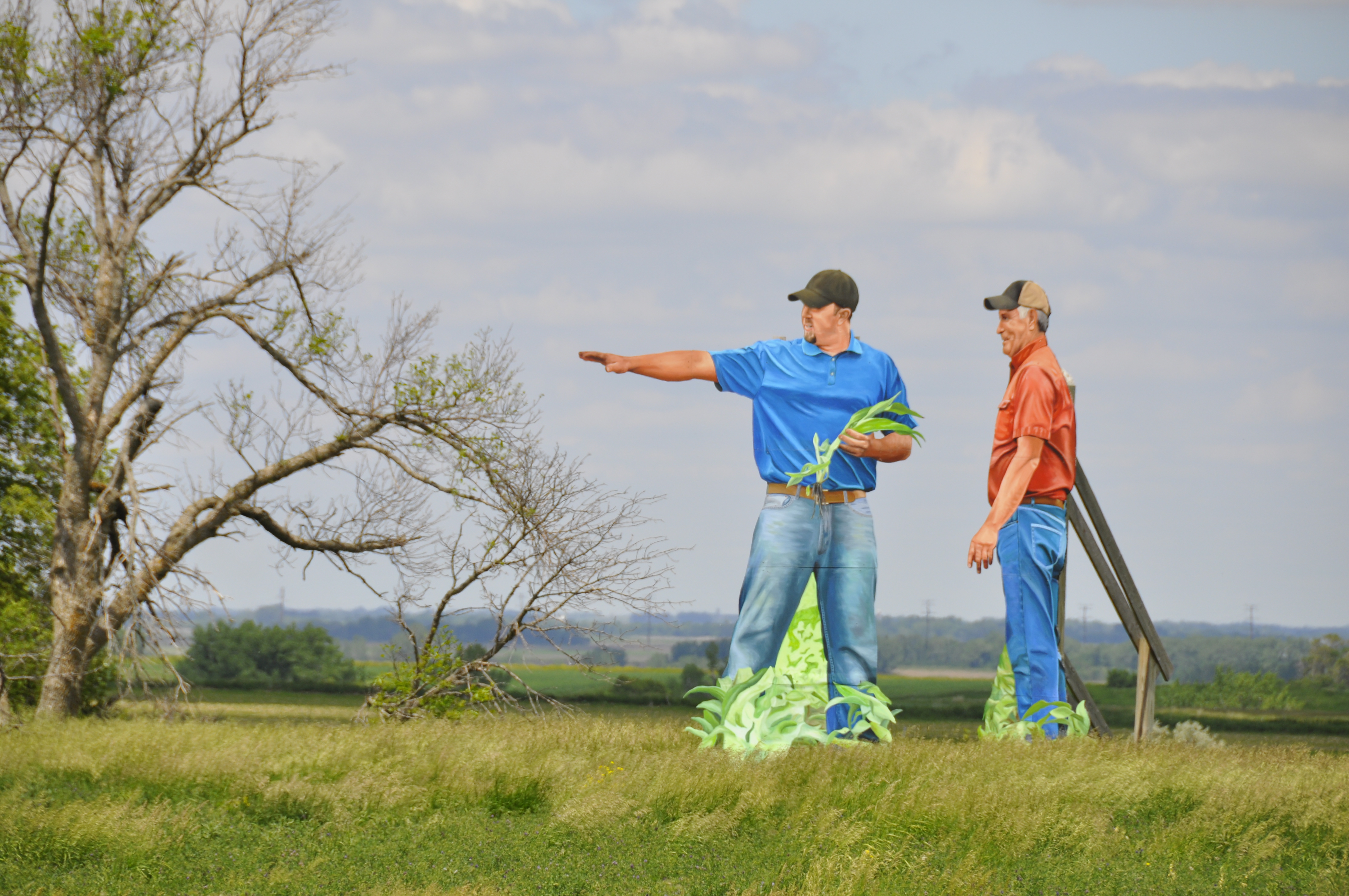 Puffy white clouds over seas of almost neon green rolling landscapes are a treat but there is so much more to see on the back roads of South Dakota. A meandering route from Jamestown, North Dakota to Marshall, Minnesota, through Andover, Webster and Milbank yielded several unexpected, yet typically wonderful symbols of pure Americana.

Somewhere close to Andover on the east side of Hwy 12 are giant cutouts of two farmers – so animated, so colorful, so realistic – pointing to something in the distance, seemingly lost in conversation. Though this route draws little traffic, it’s somewhat difficult to slow down in time to take in the exquisite detail. The two are so striking, that it’s worth a turn-around if you do drive past.

Within a couple dozen miles, I found a wonder that honors our country and the symbol of victory and freedom, a vivid over-sized flag squarely painted on the corrugated tall, dull gray tin exterior of a barn, one of many that dot roadsides throughout the nation. The artist must know how his works inspires travelers!

Cattle here are healthy by anyone’s observations. Their coats are shiny . They just look robust. Many herds roam the hillsides, most with heads buried deep in the greenest of grass, accompanied by their young, I passed dozens, but there was one group that hugged the fence as I slowed to get a better look. The honorary member was a horse who seemed just as comfortable as if it were surrounded others like him. Perhaps they expected some hay or feed. They were very patient while I photographed them and when I talked to them, they returned the effort. We developed somewhat of a bond if only for a few moments.

This museum signage as well as the barn it was posted on caught my eye. They architecture, simple was magnificent. The shear size of the building was a spectacle, but it was the curved arch that ran from roof peak to a point just short of halfway to rafters’ edge that made it memorable. The large roof, painted white seemed to challenge the skyline, it’s large frame perched upon a carpet of green. Though the sign seemed to invite lookers, the lack of vehicles and mowed area to approach hinted otherwise.

Many utility buildings jut into the skyline, wearing rust of a century past. Some are still in use, but if they still are, not in the way they once were. Their purpose is ancillary now. They stand in tribute to decades past.

1 thought on “Giants of the fields and more – near Andover, SD”